I am an active, producing artist, teacher, and nationally known ceramic sculptor whose interests include the nature and mystery of the human body. I've presented workshops in such locations as The Sydney School of Art, Sydney, Australia; The Anderson Ranch Arts Center, Snowmass, Colorado; The Hawaii Craftsmen Council, Honolulu, Hawaii; and The Tennessee Arts Academy, Nashville, Tennessee. My work is represented in collections in Denmark, Russia, Latvia, and across the United States.
​
I earned a B.S. degree in Design from the University of Michigan, Ann Arbor; a Master of Education in Art from Penn State University, State College; and an M.F.A. degree from the University of Wisconsin-Madison. As a young student, I studied in England and Italy, and taught art in American public schools. As a teacher in an International School, I taught for a year in Tanzania, East Africa, and have traveled widely.
​
I now live at 7,000 feet in altitude in Flagstaff, Arizona, location of the discovery of Pluto, where I'm a passionate observer of the clear night skies. I was the 2009 recipient of Northern Arizona University’s “Most Significant Creative or Artistic Work” Award for my project, “The Planet Series," figurative interpretations in clay and fiberglass of the planets in our solar system. My work has been exhibited at Northern Arizona University, at the National Council on Education for the Ceramic Arts Conference in Phoenix in 2009, and at Lowell Observatory, Flagstaff, Arizona, in celebration of the International Year of Astronomy.
​
My sculpture, “9/11: In Memory of The Heroism of First Responders," as well as all nine works in the “Planet Series," have been permanently installed in the newly remodeled Ardrey Memorial Auditorium on the Northern Arizona University campus in 2012. The Ardrey Memorial Auditorium is the premier entertainment venue for all of Northern Arizona.

I am Professor Emeritus of Art in the School of Art at Northern Arizona University, where I taught in the ceramics area from 1987 until 2011. I've received many awards for teaching excellence, including the “Teacher of The Year” award in the College of Fine Arts in 2002-2003. I enjoy contact with my students, many of whom hold prestigious positions in art across the United States. — Paula Rice, 2012 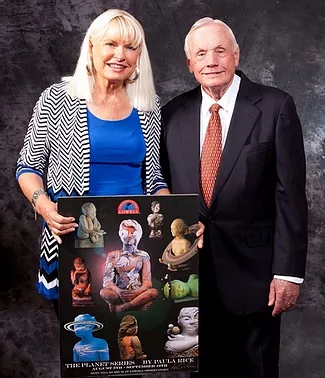 See a gallery of images from the grand gala reopening of Ardrey Memorial Auditorium with Paula Rice's "The Planet Series" and "Tribute 9/11."